Things had to cool down after the further scandal which had involved Oscar Wilde and Lord Alfred Douglas while they were in Naples and Capri. So, Wilde quickly left the island and with the little money he had left, headed alone to Taormina in 1898. Wilde was not only attracted by  those magnificent rocky and enchanted bays of the dark blue Mediterranean or that mythological fascination that Sicily offered to its visitors. At that time Sicily, with its ancient Greek associations, had become a sort of dream land for homosexual literati of the time. It was the place where to project their sexual fantasies and invoke the legitimization of the ancient ‘Greek love’ tradition. This is the Sicily Wilde had in mind when he wrote the following lines taken from ” Charmides” in 1881.

“He was a Grecian lad, who coming home
with pulpy figs and wine from Sicily
Stood at his galley’s prow, and let the foam
grow through his crisp brown curls unconsciously,
and holding wave and wind in boy’s despite
peered from his dripping seat across the wet and stormy night»

Of course, Bosie had not been forgotten. Once arrived in Sicily and soon charmed by Taormina’s beauty and atmosphere, he missed him even more. He would have liked to enjoy his lover’s company in that magic place and so he started to send him passionate letters. This was more or less their tone: “my arms without you, grasp a void”, or “I’ve discovered a lover’s paradise where we will come to live together one day”.

In Taormina he stayed in the Hotel Victoria, which still exists today, on the Corso Umberto at number 81. Wilde made numerous visits to Baron Wilhelm Von Gloeden’s studio inTaormina, which was already famous throughout Europe. Von Gloeden had invented a new, extraordinary artistic genre: recreating the archetype of Magna Graecia with a backdrop of magnificent vistas and the close-up of beautiful and primitive Taormina children posing naked. Those photographs went out all over the great capitals of the Old Continent and  launched a simple message: in that world homosexuality was not a taboo, but it was practiced as in ancient Greece. 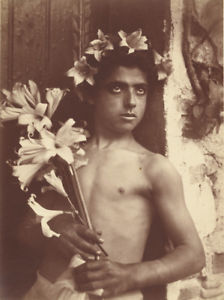 During the thirty days of Oscar’s staying in Taormina, he attended Gloeden, learnt his photographic techniques, adorned and made up the kids who posed for him before the photo shoot.They were the same kids who filled the barrels of sea water that carried on their shoulders from the Bay of Mazzarò to the village to pour them into the writer’s tub, following the example of his friend the Baron, who had the habit of bathing in salt water.

Oscar Wilde left Taormina on the 13th  February of 1898 with his suitcase full of shots of those “marvellous boys”; that is how he defined the boys in the photographs of Von Gloeden. Still today, among the cards belonging to Oscar Wilde, there are two of  Von Gloeden’s photographs. His friend Gloeden hoped to have his friend back soon in Taormina. He took him by the hand, and with great generosity and affection, offered him his house. Wilde responded with bitterness:

«I thank you, but the Mediterranean sun is no longer for me. Alfred yes he loves the southern sun and can enjoy it, so young and in love with life.. I know that he is nearly settled in Capri, who knows if he won’t decide to stop off in Taormina, which we’ve talked about a lot and where we have dreamt for so long of living together one day».

In April 1900 Wilde returned to Sicily, just a few months before his death but he would never walk again the streets of Taormina. He truly enjoyed the beauties of the Sicilian capital, Palermo, under the false name of Mr. Frak.  One day, young poet Achille Leto bumped into him. He was sure of having recognised the famous artist and asked : “Are you Oscar Wilde?“. Oscar looked at him and said: “I was Oscar Wilde“.