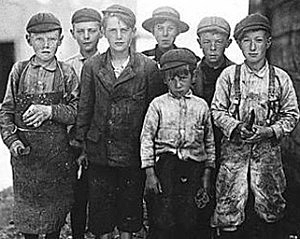 During the Industrial Revolution  thousands of  desperate people came to the cities seeking work, but those lucky who managed to find one soon realized that the average wage would have kept them in poverty for the rest of their lives. Justices were given authority over the children of poor families, and began to assign them to apprenticeships to provide them with work, food and shelter.

For master chimney sweeps, these small, defenseless children of powerless or absent parents were the perfect victims to be exploited in their business.

Their apprenticeships lasted seven years or even more, but being generally unsupervised, once the papers were signed, the children were completely left under the power of their masters. Once left, their families often didn’t see them any longer. A Master was paid a fee to clothe, keep and teach the child his trade. Even if it common belief that both the master and the child apprentices were always male, this wasn’t always true, as many girls also climbed chimneys.

There’s little Tom Dacre, who cried when his head
That curled like a lamb’s back, was shaved, so I said,
“Hush, Tom! never mind it, for when your head’s bare,
You know that the soot cannot spoil your white hair.”

After the Great Fire of London in 1666 new fire codes were necessarily put in place. Chimneys became smaller to burn coal and the number of turns and corners in the flues increased. The flues gathered ash, soot and creosote much more quickly than the larger, straighter chimneys had, so they needed cleaning more often. The chimney flues were pitch black, claustrophobic, potentially full of suffocating soot and confusing to navigate in the dark. Sweepers’ job was, actually, to climb up, inside the chimney, brushing the flue as they went, propelling themselves by their knees and elbows and they weren’t done till their heads poked out of the chimney top. This, of course, was a scary job for these children and they were often unwilling to perform it, therefore, many masters used a dangerous punishment: first the child was forced up the flue and then a fire was lit. Since he couldn’t come down, he had no choice but to climb up the flue. Maybe this is where the term “light a fire under you” originated.

And so he was quiet, & that very night,
As Tom was a-sleeping he had such a sight!
That thousands of sweepers, Dick, Joe, Ned, & Jack,
Were all of them locked up in coffins of black;

If the apprentice climbed the whole chimney, cleaning it from hearth to rooftop, and exited a row of chimneys, he could forget which chimney he came out of. When that happened, he could go back down the wrong one, or go down the right chimney, but make a wrong turn at some merging of the flues. Children could suffocate or burn to death by getting lost on the way down, and accidentally entering the wrong chimney flue. These children lived in deplorable conditions. They carried a large sack with them, into which they dumped the soot they swept from the chimneys. They used this same sack as a blanket to sleep in at night, and only bathed infrequently. They were often sick, and learned to beg food and clothing from their customers as all the money they earned went to their masters.

And by came an Angel who had a bright key,
And he opened the coffins & set them all free;
Then down a green plain, leaping, laughing they run,
And wash in a river and shine in the Sun.

Even if some children actually received the weekly bath outlined in the apprenticeship agreement, the majority of them was never bathed or followed a more common custom of 3 baths per year, at Whitsuntide (shortly after Easter), Goose Fair (early October) and Christmas. In London, many sweeper apprentices used to wash on their own in a local river, the Serpentine, till one of them drowned. Since then the children were discouraged from bathing in rivers.

Then naked & white, all their bags left behind,
They rise upon clouds, and sport in the wind.
And the Angel told Tom, if he’d be a good boy,
He’d have God for his father & never want joy.

Another great increase in the use of small children as chimney sweeps occurred in England after 1773. Parliament passed an act which said that children couldn’t be kept in a workhouse for longer than 3 weeks, as it had been found out that death rates in both workhouses and orphanages was very high: only 7 out of every hundred children survived for a year after being placed in an orphanage. The effect of this act was that small children became much more available not only to chimney sweeps, but to any other business owners who were looking for cheap labor.

And so Tom awoke; and we rose in the dark
And got with our bags & our brushes to work.
Though the morning was cold, Tom was happy & warm;
So if all do their duty, they need not fear harm. (The Chimney Sweeper, Songs of Innocence, William Blake)

The children risked to be stuck in the chimneys or die from burns and suffocation or even from long falls. For what concerns the boys, there was also another danger. Coal soot found its way easily into the folds of skin on a boy’s scrotal sac due to loose clothing and climbing in the nude. As the soot was not washed off for months at a time over the years, many of the boys developed scrotal cancer, called “chimney sweep’s cancer” about the time they entered puberty.

A little black thing among the snow,
Crying “weep! ‘weep!” in notes of woe!
“Where are thy father and mother? say?”
“They are both gone up to the church to pray.
Because I was happy upon the heath,
And smil’d among the winter’s snow,
They clothed me in the clothes of death,
And taught me to sing the notes of woe.
And because I am happy and dance and sing,
They think they have done me no injury,
And are gone to praise God and his Priest and King,
Who make up a heaven of our misery.” (The Chimney Sweeper, Songs of Experience, William Blake) 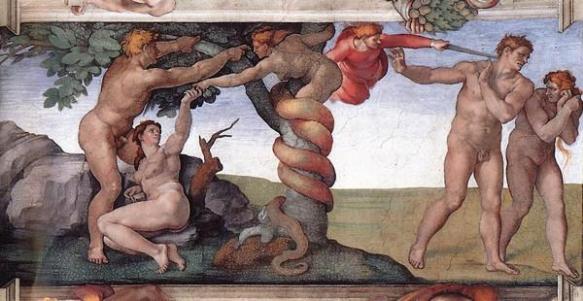 The romantics have often been regarded as reactionaries, because of their unwelcoming attitude towards the great mutation that the industrial revolution was about to produce in their country. A revolution is a radical, somehow violent change, whose consequences are often unpredictable, but the early romantics instinctively felt that the great transformation the world was undergoing wouldn’t have been free of charge. Modern man, once left his “natural state” and thrown into the dynamics of a materialistic and competitive society, dominated by the threat of clock time, would have seen the nature of his certainties collapse with the consequent urgency of redefining a new scale of values. But what kind of values can a materialistic society produce? Wealth? Success? Career? Can a society, where the imperative is “time is money” and where men are treated as small mechanisms of a careless system, be considered as an improvement to the previous one in terms of quality of life and, why not, happiness? Certainly not. That’s why the romantics kept on fighting strenuously against “modernity”, advocating the superiority of the values produced by the “old” world. If men abandoned their Eden, their natural state, just like modern Adam and Eve, they would only find pain, hard labor, misery, hence slowly becoming insensitive and indifferent. Therefore they began to strive using their lines as weapons, lines that they had deliberately simplified in order to reach with their message the heart of as many people as possible. They talked about the importance of memory, the beauty of nature, the necessity of a world of sensibility without restraining from the impulse of imparting a moralizing lesson. But the process now couldn’t be stopped and somehow they were defeated by the course of events. The great industrial change had spread all over the country and towns, like mushrooms, kept on growing disorderly but faster and faster. At the altar of “modernity” man was sacrificing his greatest gifts as well: his creativeness, his sense of taste and harmony. Man now needed to put at the top of his scale of values beauty, many artists claimed. The most optimistic were convinced that educating people to beauty would have meant to improve man’s ethical sense at the same time, but the majority of them thought that now it was too late to teach anything to anybody and kept themselves away from the rude and insensitive masses. The first five decades of folly of the twentieth century and two world wars swept away the few certainties and values left and men seemed now motionless seated on a “heap of broken images” of the past waiting for their Godot like Beckett’s Vladimir and Estragon. We are still there.