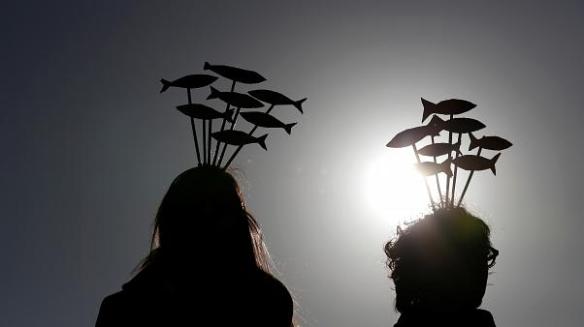 Mala tempora currunt. These are desperate times and it has been so for quite a while. Too much. The outcomes of global politics of these last years has been so far only division, hatred, selfishness and it seems that perspective of erecting barriers, thus protecting our little world, makes everybody happy. Those who don’t find themselves in all this have been left alone, as that disruptive wave of populism with its simple but effective language has found the political antagonist forces unprepared and weakened, if not ridiculed, by the power of  their slogans and tones. So, we have become hopeless spectators of what to me is a cultural disaster, waiting for “a someboby” that when the time comes takes us out of this mess. But, what if we imagined ouselves to be that somebody?

Only a month ago Mattia Santori, 32, from Bologna, felt the urge of doing something. A couple of days before Salvini and his coalition partners, the smaller far-right party Brothers of Italy, and Silvio Berlusconi’s Forza Italia, were due to launch their campaign for the Emilia-Romagna regional election at an indoor sports arena in Bologna. Emilia-Romagna has been since ever the stronghold of Italian left wing and there is a real danger that Salvini might win the election. He sent an urgent message to three friends late at night telling them to meet the next day. Over lunch, the four friends hatched a plan to Salvini’s boasts about filling Italy’s squares with supporters. The sports arena had a capacity for 5,700 people, and so, via an announcement on Santori’s private Facebook page, the group invited people to a counter-rally at Bologna’s Piazza Maggiore, with the aim of attracting 6,000 people. 15,000 people filled the Bologna square.

As Salvini’s far-right electoral alliance pursued its campaign, the Sardines converged in other Emilia-Romagna cities before spreading across   Italy, Turin, Florence, Naples and  yesterday they arrived in Rome. They call themselves “Sardines”, as they aim at filling squares packed together like sardines in a tin box, so sardines are the thousands of people who spontaneously gather to manifest their discontent towards the language of populism embodied  by former minister Matteo Salvini and his party.

Yesterday’s square, Piazza San Giovanni in Rome, was not a tight space, it was enormous, an ocean.  Nonetheless, and immense crowd of sardines, young and old succeeded in filling a landmark which has hosted memorable rallies. All of them demanded another way of doing politics, a different storytelling, which is not only a never ending political campaign on twitter or fb, which feeds itself with fears and the rethoric of hatred. The only way which leads to a future of peace is that of anti-fascism, anti-racism and solidarity.The full squares are a clear message to politicians, both left and right.

Very interesting so far, but what comes next? This is a movement, and movements only dent the so called political system or they may end up being swallowed by it, if they just aim at agitating waters. As after a while, sediments, having recovered from the unexpected tides, settle comfortably again, so nothing changes. Our recent history has already undergone the effects of another movement, the so called “five star movement”. They believed they embodied the revolution in politics and would have opened parliament just like a can of  tuna –  fish metaphors seem to be very en vogue and effective here – , but when they turned into a party and got the majority of votes with an incredible 34%, they actually upset the political balances of parliament, only, they didn’t understand that that was the easy part. Once elected and comfortably seated in the can, the destructive phase was now over and  should have been replaced by the constructive one. Their effective slogans crashed against reality and furthermore, being totally inexperienced, they paved the way to a much more skilled shark named Matteo Salvini. 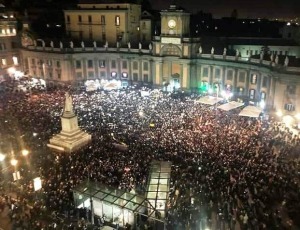 So I ask again: what comes next? Pietro Nenni, an Italian politician, long time ago warned that full squares don’t fill ballot boxes, as the recent history of Brexit demonstrates, so we cannot hope that the “sardines” will stop Matteo Salvini and friends, for sure. However, the people in  these squares showed us that we are not alone, we are many and in our small way we can react to the populist wave.  It is good to talk about politics rather than empty slogan again, it is good to see anti-fascist and anti-racist squares, it is good to see a positive attitude in all the people who joined the rallies and this gives me hope. From Piazza San Giovanni, together, we may start to make a better future.