“What a piece of work is a man”: the noblest of all God’s creatures, the very essence of grace and beauty, “infinite in faculties”, “in action how like an angel“,” in apprehension how like a god” (Hamlet Act 2, scene 2) or…. is he only just an animal endowed with a little reason which he can’t even use properly? Swift wouldn’t have had the smallest doubt in choosing the second option.In the second book of Gulliver’s Travels, there is an episode that well explains his point of view.

Swift’s hero is in front of the King of Brobdingnad (the giants) with the design of acquainting him about all the wonders of English civilization. The king seems to pay great attention to Gulliver’s boast upon the political, cultural, scientifical achievements of his country, but in the end he comments his speech using the following mordant words:“I cannot but conclude the bulk of your natives to be the most pernicious race of little odious vermin that nature ever suffered to crawl upon the surface of the earth“.  It’s clear that Jonathan Swift didn’t share the optimism of an age that believed that modern man could reform society using reason, challenge ideas grounded in tradition and faith and advance knowledge through scientific method. Quite the contrary. To that “greatness” of the Enlightenment creed, he opposed his idea of the moral “smallness” of man. 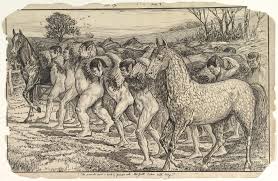 Throughout the novel Swift seems to be busy in analysing, dissecting, mortifying man with the only aim of demonstrating his viciousness, ineptitude and ignorance, making him thus meritorious of contempt rather than admiration. His characters are more body than mind and despite their use of reason, they cannot conceal their bestial traits. To convince us of that, he removes that veil of respectability and dignity that seems to characterize modern cultures and, without hiding a certain satisfaction, focuses his attention on those actions (defecating, urinating) or those parts of the body which, for good reasons of propriety, are usually considered taboo. Without that veil man is only a beast, a beast in disguise: a Yahoo.

In Gulliver’s last adventure on the land of the wise horses, he meets the Yahoos, but he stubbornly doesn’t seem to recognize any human traits in them (but we do), even if he meticulously analyzes every single part of their body with scientific zeal, anus included. Gulliver/ Swift shows all his revulsion, lingering on long descriptions which have the aim of exaggerating and distorting, thus making the reader feel the same repugnance. At first he feels “discomposed” at the sight of the Yahoos’ “singular” and “deformed” features, but detail after detail there is a crescendo of unrestrained aversion that makes them become “beast“, “ugly monsters“, “cursed brood“. The act of defecating on Gulliver’s head is the ultimate proof of the degradation of the Yahoos/men, who don’t seem to feel the shame of their actions. But when after a while Gulliver bumps into the wise horses, they see only a Yahoo with clothes on: a beast in disguise.