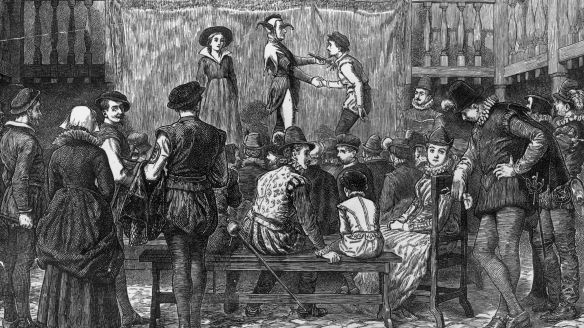 Greek theatre ignored the division into acts. Greek representations consisted of several distinct parts, called protasis (introduction), epitasis (main action), catastasis (climax), and catastrophe (final resolution), but actually no interlude separated the individual parts. When the main actors left the scene, they were replaced by the choir, who sang or spoke their lines in unison, a collective, universal voice which commented on the dramatic action. Acts are, actually, never mentioned by ancient authors, not even Aristotle, in his Poetics, refers to such a division.

It was Roman drama critic Horace, three hundred years after Aristotle, who advocated a 5-act structure in his Ars Poetica: “A play should not be shorter or longer than five acts” and by the beginning of the first century it had become conventional in Rome. All Seneca’s plays, for example, were structured in five separate acts with musical interludes between them. The German critic, Guystav Freytach (1816-1895), attempted to rationalise the five act structure. In his model the first act is the exposition, where characters, character’s backstories, setting are introduced and it usually ends with the play’s significant piece of action.The second act takes that action and complicates it: that’s the rising action. In the third act there is a climax, the turning point, where the fortunes of the character or characters are reversed – either good to bad or bad to worse. In the fourth act the results of the reversal are played out and the hostility of the counter-party affects the hero in many ways. This is the falling action. In the fifth act the hero meets his logical destruction and that is the catastrophe. These ups and downs seem to follow the sequence of breathing: inhale/exhale. In a way we may say that drama is modelled on human nature.

Shakespeare’s plays do not exactly fit any pattern described above. They do not conform to the Aristotelian one and even if they may somehow resemble Freytach’s scheme, they do not completely fit into it. Shakespeare did not even divide the plays into acts and scenes, as it was done for the first time by the playwright Nicholas Rowe (1674-1718), in his six volume edition of Shakespeare’s plays he edited in 1709. Shakespeare put on stage the dynamic of the world he knew with the sensibility of the genius he was, regardless of defined rules and patterns. His stories were based on the alternation of order and chaos. At the beginning of any Shakespearian play there is an order which is usually broken by the evil action of a villain, fate or  a war, till eventually another order is achieved. In this alternation we keep moving forward, as the order attained at the end of the final act after the catastrophe is completely different from the previous one. This consideration should “give us pause“.

Hence, what we learn is that once, for any reason, a situation of stability is undermined, it is foolish to dream to restore it as it was. At the end of Act five, we can only expect to tackle the first act of another play. Every time we wonder about when we can ” go back to normal” after this pandemic, I fear we have to be ready to figure an entirely new “normality” . A normality made of masks, social distance, unemployment, disputes among countries and who knows what else to the next catastrophe.This is life and this proves that after all, the bard was right,”all world is a stage“.