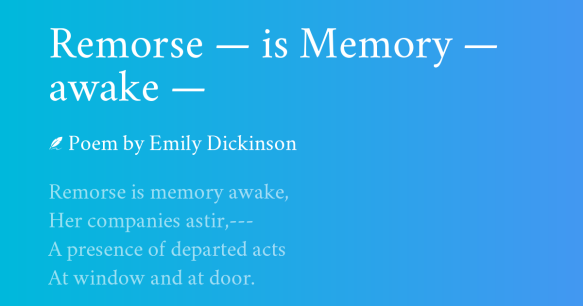 That sacred Closet when you sweep —
Entitled “Memory” —
Select a reverential Broom —
And do it silently.

Every year, on the 27th of January the world observes the Holocaust Memorial Day. On that day we are called to remember how far can the folly and cruelty of man can go. We must remember; and teach our children that the privilege of being born in such a long time of peace and wealth, at least in this part of the hemisphere, is not for granted, it may not last forever as those dangers are always behind the corner. Peace must be defended by any attack ignorance and arrogance may launch.

Some students from a school in Palermo saw those dangers and on the occasion of the Holocaust Memorial day last January, they decided to put their thoughts in short video made of a few slides. The above poem by Emily Dickinson with its warnings was the elegant introduction to their work, just to say that they had actually swept that “sacred locket” with the utmost care and that in that “domain of dust” they had perceived the semblance of the same ghosts of the past still roaming in the present. Of course, they wore different clothes, their manners could seem more agreeable or even affable sometimes, but there they were. Hence, they proceeded comparing the Italian racial Laws of 1938 step by step, that is, those laws which restricted the civil rights of the Jews, to the first Security Decree of the Minister of the Interior Matteo Salvini of 2018, which regulated the rights and protection of the immigrants in our country with the conclusion that they had similar traits. It wasn’t actually even a very original work, as a popular Italian magazine, “L’Espresso”, had already extensively compared the two measures a couple of months before. Nevertheless, this demonstrated that those students were at least well informed and displayed an uncommon poetical taste. 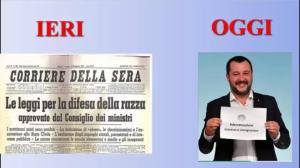 That article had no consequences of any kind, there is still freedom of expression as far as I know, but things didn’t work the same for what concerns those students in Palermo or better, their teacher: Rosa Maria Dell’Aria. The latter, in fact has been recently put off her job for two weeks. She was considered guilty of  having allowed her students to express their free point of view rather than censor it and require a disciplinary measure against them. Don’t rub your eyes, you’ ve read it right, she was requested to censor her students’ thoughts, thus ignoring the Statute of  Students, which in paragraph 4 of article 4 states very clearly that “in no case the free expression of opinions correctly manifested and not detrimental to the personality of others can be sanctioned, neither directly nor indirectly,  ” and in case somebody forgot:”The life of the school community is based on the freedom of expression, thought, conscience and religion, on the mutual respect of all the people who compose it, whatever their age and condition, in the repudiation of any ideological, social barrier”. The video was clearly a free expression of opinions just like the article and the cover of the “L’ Espresso”. Hence, the teacher was punished for complying with the Students’ Statute and acting correctly. 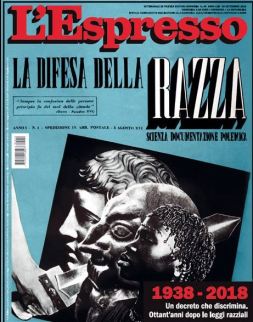 What I find really alarming is the presence of the DIGOS (the police department dealing with political security) in a school of teenagers in Palermo. Does that mean that if a student expresses an opinion that the government dislikes, the police department that deals with political crimes or terrorism is allowed to intervene? So, am I to expect to find the police in my classroom if somebody says, that the second Security Decree, for instance, which should be approved tomorrow, goes openly against human rights, as everybody says, because it means at stopping immigration sanctioning those who go to the rescue of the immigrants at sea with fines between 3500 and 5500 euros for each migrant transported, thus condemning to death those who will try anyhow to leave their countries looking for a better future. This is but an intimidation. An attack on the freedom of students and teachers. An attack on the free and democratic school and teachers cannot be found divided or distracted this time.

At end of the video, those student asked a question: what is the point of celebrating the Holocaust Memorial Day, if we seem to forget everything, making the same errors of the past? But, they had an answer and a good one, in my opinion: commitment. Remembering is the key that should make us feel like committing ourselves more, learning from the errors of the past to create a better future, because if we choose only to be the spectators of life, we may not enjoy the show sooner or later and then it might be too late to change channel.

15 thoughts on “That Sacred Closet When You Sweep”