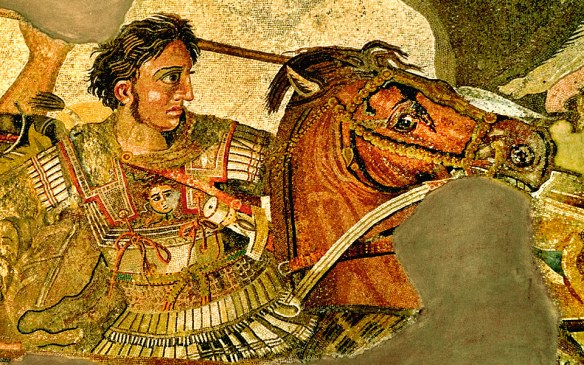 “Alexander III of Macedonia, commonly known as Alexander the Great, was 22, when he landed in Asia Minor with an army of 50.000 soldiers. Once he put his foot on shore, he symbolically stuck his spear on what for him was Asian ground and said: this land is mine”. This is the incipit of one Alessandro Baricco’s memorable lectures on the vital importance of storytelling and, of course, he chose a great story to tell in order to get his point, so let’s keep on with the narration.

First of all: why did a Macedonian king claim those vast Asian territories named Persia, the greatest empire of the time? It could seem like madness at first glance, but he had a powerful reason: to save the honour of the Greeks. Long time before, the Persians had invaded Macedonia and Greece, a war which was won eventually by the Greeks, but at great expense for the people. Everything had been destroyed: villages, houses, temples. As the Persians had come there and burnt their temples, hence it was his right to conquer their land and burn theirs. Alexander had inherited this pan-Hellenic project from his father, who had hired Aristotle himself for his education. When his father died and he was awarded the generalship of Greece and used this authority to launch the campaign for the conquest of Persia.

By the way, it was a crazy enterprise. He arrived with “only” 50.000 soldiers, a small bunch of men if we consider that the Persian empire was inhabited by millions of people who could be recruited any time by Darius, the King of Kings. Wherever he went, the Persians could have put together an army three times his. Something more had to be done, that’s why Alexander’s story of conquest and revenge took necessarily the form of legend. He wanted his people to see him more like a God than a king. That is why he started his conquest of Persia with three symbolical actions. First of all, he went to pay homage to the tomb of Protesilaus, who was the first  to leap ashore at Troy, and thus the first to die in the war. That was the destiny of any “first” man who put his foot on Persian land according to a prophecy. Alexander, wanted to be the first to touch the ground, but he didn’t die, thus proving that predictions didn’t work on him as he was a God.

Then he went to visit the tombs of Achilles and Patroclus along with Hephaestion, his life mate. Achilles was among those legendary figures of the war of Troy, the one and whose values he identified himself the most and he was a demigod, after all. Finally, he felt the urge to do something apparently nonsensical. He risked his life and that of the comrades who followed him to reach the Libyan desert to ask the oracle of God Amon  the following question: ” Am I Amon’s son”? Alexander must have had a monumental ego, this is a matter of fact, but all this was to make his story more appealing. They were about to fight a war, which would subdue Persia under the Greek dominion and the only one who could lead them to victory couldn’t but be a God. Gods are no losers.

Well, they won. Alexander won because he had an appealing story to tell, made of dreams, legend, conquest and his people followed him to victory. He had understood the immense power of storytelling. Can we give a definition of storytelling to make all this clear? Of course. Reality = facts + storytelling, namely, it is the reality devoid of facts and a fact without a storytelling does not exist, it is not real. Only those facts which are part of a narration are true.

At this point of Baricco’s lecture, I understood. Those large movements, which are growing worldwide, are fed with storytelling and they will never be stopped by facts. The facts of the unattainability of electoral promises or the evident incapability of this or that politician, these are facts, but they can’t be a barrier to what is mostly irrational and emotional. It is a sort of collective automatic response, an indomitable stream. It follows man’s animal instinct, the one which makes you believe to absurd things. Alexander wanted to conquer Persia, as they had destroyed the Greek temples 150 years before. Never mind if they were not exactly your temples, as Alexander was Macedonian, it is a meaningless detail compared to the power of the storytelling.

That is why, as long as we want to oppose those movements taking the evidence of the ineptitude of leaders or the folly of some election programmes, with facts, we are in the wrong. Facts do not appeal masses. We need to find a new storytelling; and soon.

11 thoughts on “On the Importance of Storytelling”