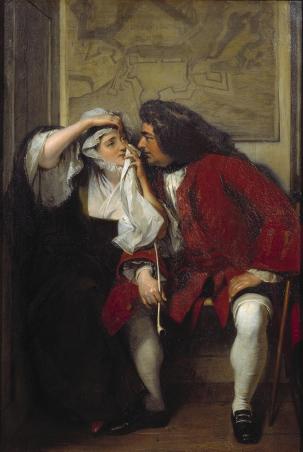 I’ve always been of the opinion that Sterne would have been wonderfully at ease with modern means of communications: his great irony and wit would have made him a great blogger, for sure, but even twitter might have been his natural scene with its short, sharp, effective messages. And how he would have enjoyed scattering emoticons here and there throughout his “The Life and Opinion of Tristram Shandy, Gentleman” only if he could, but since there was nothing of the kind at his time, he used hyphens, dashes, asterisks, crosses, symbols  with the same function. He understood, in fact, that signs had a quick and powerful impact on the mind of readers, exciting their curiosity with the effect of drawing them into the story.

This is exactly what I felt when I first read Tristram Shandy,  I was part of it. The reader, in fact, is so central that very often becomes a character among characters but without a definite script. We are invited to make drawings of the people the author doesn’t feel like describing himself, share his feelings, whether of joy or sorrow, or furthermore he demands our undivided attention whenever he pretends to say something important. All of a sudden, we find ourselves part of a fictitious world just like sometimes it happens in the stagings of some modern plays, when actors arrive from the back of the theatre, thus making you feel baffled.

The characters we have to interact with have not the typical stamp of bourgeois heroes, but they are common people like us, with dreams, passions or better hobby-horses, frustrations and disappointed hopes mostly. There is nothing relevant to say, actually. In Tristram’s life, in fact, there are not grand events to be told, but incidents that make him the hero of ordinariness. Of course, his father, just like any other father, had dreamt for his son a future made of success and glory, that’s why he wanted him to be named Hermes Trismegistus, that means not one but three times great, however, it unfortunately turned out to be Tristram only because of a misunderstanding between his father and his Uncle Toby, thus descending from the Olympus of the gods and becoming one of the many, one of us.

The bits and pieces of his life are disorderly narrated and this is the other element of Sterne’s modernity. He was the very first one to focus his attention not only on the life of his protagonist, but on his “opinions”, that is: his mind. He instinctively understood that if he wanted to deal with his mental processes, he should sacrifice the backbone of the novel structure: chronological time. It is, actually, impossible to delineate its plot. Just few examples: the preface is unusually placed in third chapter, he is the ironic judge and spectator of his own conception in the first one – and what a taboo he breaks talking about his own parents having sex -, any attempt of narration is interrupted by digressions and associations, he decides to skip from page 146 to 156 on account of missing chapter 24 – he didn’t feel like writing it –  etc.  Therefore, even if Sterne couldn’t have the support of the studies of psychoanalysis, he succeeded in representing the chaos of our mind on paper anyhow, in a rather primitive way, of course, but it allowed him to have his place among the gods of English modern novel as their forefather.