It is undeniable that the new technological connected world has brought to the collapse the past idea of relation, politics, education, art and somehow given voice and shape to a very long gallery of people who would have barely seen the light before: scarcely educated, rude, arrogant, tasteless, they flood the world with their superficial, trivial, sometimes violent but incredibly effective messages. As barbarians they implacably destroy our certainties and nothing seems it can be done but walking hopelessly among those ruins of the past. The point is: are these barbarians ruthless destroyers or maybe is this only the way we perceive and fear change ? After all, whatever cannot be fully understood is often seen as a threat. Am I just growing old and losing touch with the new? Maybe, we should just modulate the way we look at things rather than feeling continuously under attack. 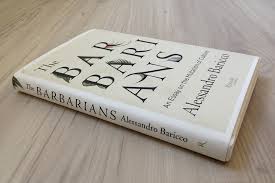 This is what suggests Alessandro Baricco, Italian novelist and essayist, for whom the barbarians represent innovation rather than violence and destruction. In his ” The Barbarians: an essay on the mutation of culture“, Baricco remarks that the beginners of a new era have always been considered barbarians by their contemporaries, because they smashed past tradition. What they had in common was a good degree of that foolishness so dear to Steve Jobs: the clear perception of change. In the past Diderot and D’Alembert must have seemed barbarians at the eyes of the intellectual elite of the ancient regime, let alone the revolutionary music of Mozart and Romantic poetry, of course, which in fell swoop destroyed all the canons of classicism.The use of simple, unelaborated language, common themes, blank verse, for the purist of the age was a barbaric act on classic form. Actually, I myself have often  thought while reading Wordsworth‘s “Daffodils”, for example: “uhm , so puerile” and quite annoying all that flood of synonyms of the word “happy” (bliss, joy, jocund…)  as  if that were the only way to communicate the reader how happy he felt, but rather, resulting in my mind as a sort of Pharrell William walking in that wood singing and dancing wildly “because I’m happy“. And pray, don’t be offended by the word “puerile”, I borrowed it from Shelley‘s comment on the poem. All these people had to vandalize past canons to let their genius explode. 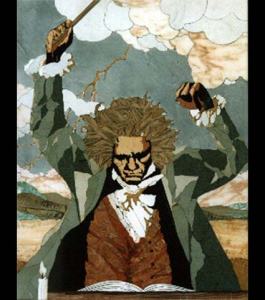 You wouldn’t believe it, but even Beethoven was considered a barbarian for his age. The critic of the Quarterly Musical Magazine and Review used the following words to review his most celebrated ninth symphony in 1825: “Elegance, purity and measures, which were the principles of our art, have gradually surrendered to the new style, frivolous and affected, that these days of superficial talent  have adopted. Brains that, for education and habit, cannot think of anything else but clothes, fashion, gossip, reading novels and moral dissipation, are struggling to experience the more elaborate and less febrile pleasures of science and art. Beethoven writes for those brains, and in this he seems to have some success, if I have to believe the praise that, on all sides, I bloom for his latest work.” And even the American reviews did not spare negative comments:”…very much like Yankee Doodle,” sniffed a Providence, R.I. newspaper in 1868 and “Unspeakable cheapness,” declared Boston’s Musical Record in 1899. Hence; Beethoven was only endowed with a superficial talent for them and treated like a pop musician.

Baricco says that nowadays modern Barbarians are people like Larry Page and Sergey Brin who were only twenty when they invented Google and had never read Flaubert,of course; Steve Jobs, creator of the Apple world and that touch technology which is so typically childlike;  or Jimmy Wales the founder of Wikipedia, the online encyclopedia that has formalized the primacy of speed over accuracy. These people sincerely did not reject all the past, yet, at the time of designing the future rather than using the tools of tradition, they employed new standards with the side effect of destroying to the root, entire estates of knowledge and sensitivity that lie in a shared heritage of civilization.

So far, then, I understand that this sense discomfort that pervades me depends only on my inability of accepting the mutation of this age, as, put it in this way, the barbarians seem to be absolutely necessary for the evolution of our civilization to the same degree they accomplish the precious function of fuelling with young blood  and energy the world of ideas. But then, Baricco introduces a new category and everything becomes more clear to me. The presence of the barbarians has a physiological consequence: the growth of the numbers of the barbarized. This phenomenon has always occurred, but in an age of mass communication where everything happens so rapidly, the barbarized may eventually prevail and change the course of events, before the revolutions of the barbarians might be effectively rooted in society. Furthemore, differently from other ages, the barbarized are no longer hidden and victim of the contempt of the refined, but they are fiercely visible on tv, social media etc., some of them has even pursued a career in politics. Hence, is this what the new world is going to be like? A world in the hand of the barbarized?

In Book Six of Plato‘s The Republic, there is a very illuminating passage about the nature of democracy. Socrates is discoursing with Plato’s brother Adeimantus trying to get him to see the flaws of democracy by comparing a society to a ship. “If you were heading out on a journey by sea“, asks Socrates “who would you ideally want to decide who was in charge of the vessel? Just anyone or people educated in the rules and demands of seafaring?”  ” The latter of course“, says Adeimantus, ” So why then“, responds Socrates,” “do we keep thinking that any old person should be fit to judge who should be a ruler of a country?”

Such display of distrust in the democratic system from one of the foundling fathers of  philosophical thought and symbol of that idea of civilization which has Ancient Athens as universal icon, sounds quite striking. However, that means that since the very beginning the issue of representation was seen as the weakest aspect of democracy. Should electors require any skill to exercise their right to vote, census, education etc.? Or should we presume that democracy by birthright is the greatest modern achievement?

Socrates’s point is that voting in an election is a skill rather than a random intuition. And like any other skill, it needs to be taught methodically to people. Letting citizens vote without an education is as irresponsible as putting them in charge of that ship sailing to the frightening ocean. If they are not qualified, it might very likely crash against the rocks when the first storm comes. It sounds snobbish, I know,  but he was not. For Socrates only those who” had thought about issues rationally and deeply should be let near a vote”.Giving the vote to all without connecting it to that of wisdom could lead a system the Greeks feared above all:( demagoguery: dēmos ‘the people’ + agōgos ‘leading) and only education could be the most effective antidote.

Ancient Athens had indeed experienced  what being ruled by demagogues meant with Alcibiades. Rich, charismatic, smooth-talking,he had slowly eroded basic freedoms and helped to push Athens to its disastrous military adventures in Sicily. However, any era has seen the birth of one or more Alcibiades, because their real skill is exploiting our desire for easy answers, that is all. We want to believe to their alluring world made of slogans and promises without  taking the trouble of pondering on how all could be achieved or their consequences on people. We always enjoy a good story, don’t we?

As a demonstration of how our minds work, Socrates wanted us to imagine an election debate between two candidates: a doctor and a sweet shop owner. The sweet shop owner’ s speech would sound more or less like this:

“Look, this person here has worked many evils on you. He hurts you, gives you bitter potions and tells you not to eat and drink whatever you like. He’ll never serve you feasts of many and varied pleasant things like I will”. Socrates asks us to consider what the reaction of the audience would be like: Do you think the doctor would be able to reply effectively? The true answer – “I cause you trouble, and go against your desires in order to help you’” would cause an uproar among the voters, don’t you think? That’s why we prefer to give our vote to sweet shop owners rather than doctors.

But, if Socrates could be here among us and see who are the captains in charge of many “vessels” around the world, I guess he would regret that sweet shop owner, wouldn’t he?