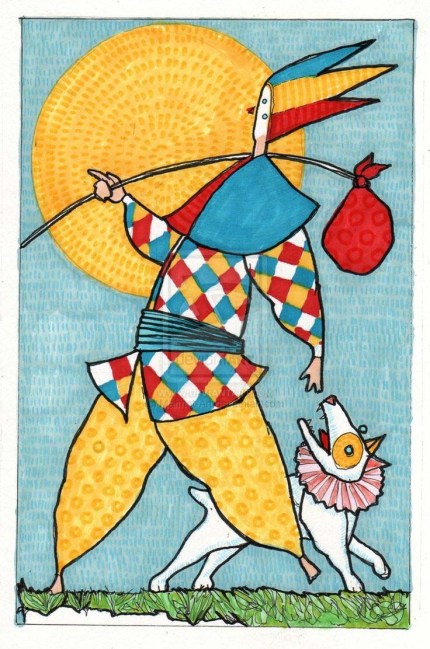 Every time it was the fool’s turn to go on stage there was great expectation in the audience. The most important actors wanted to play that role, actually. Portraying the fool did not only mean juggling or making people laugh with trivial jokes or puns, it was much more. He was charismatic, witty, shrewd, sometimes cynical, but above all, the fool was the only character who was allowed the privilege to say whatever he liked. He was a fool after all. He could target whoever he considered worthy of contempt exposing him to ridicule (with a certain prudence obviously), for example. People laughed with him, people were with him, because after all he was one of them, one who could understand their frustrations, misery, rage, disappointed hopes. With a laugh he could exorcise all that. It was a great power indeed and he knew it. But I’m sure, that not even in his wildest dreams, he would have ever imagined one day to use this power to become a politician and, why not, rule a country or become the mayor of a town. People would have died from laughing. Yes, but that was the Middle Age, the dark age. Nowadays, in the modern age, we have smashed these prejudices and we have allowed fools of any kind to be part of the active political life. Even those who were not really born fool, try clumsily to imitate them, because this seems to be what people want.

The point is that, when fools leave the familiar setting of the fictitious reality of theatres, they seem to suffer from a curious disease: the “all world is a stage” syndrome. Its symptoms are easily recognizable: they keep on acting or speaking  freely, always in search for masses to postulate, without realizing that in the real world, actions and words have consequences on people.  Problems arise when one of these fools surprisingly happens to become in charge of a political office. Making or sharing political projects with the other elected non-fools inevitably causes him to face an identity crisis, because his job has been for years that of ridiculing, attacking those he is supposed to work with. A fool is very good at destroying, but once he is demanded to reconstruct and co-operate, his mocking laugh fades away and he starts to display a certain agitation, becoming often even aggressive, because all of a sudden he realizes that he just cannot keep on playing his favourite game off stage.

But now here in Italy, the land of creativity and imagination, fools have found their fertile ground. There is a party, which has gained in importance in recent years, whose leader is a true-born fool and only yesterday that party conquered the highest political office in Rome: the bench of mayor. Will his inflaming words, captivating slogans be enough to elevate Rome from the present state of degradation? His mates, mostly recruited on the web thanks to a bunch of votes, fully inexperienced for what concerns administration and political life, will be able to understand and face the many problems of the capital? Can the “honest inexperience” of the new elected, mayor included, represent that revolution that the citizens have been expecting for years? I have my doubts, of course. However, if it worked, this kind of foolocracy could be a brand we might export abroad and it wouldn’t be a first after all, would it?

16 thoughts on “Foolocracy in Rome”