“It is better to live one day as a lion than 100 years as a sheep”, a vigorous Donald Trump retweeted a few weeks ago, raising quite a few eyebrows. In fact the maxim has always been associated to Benito Mussolini, the Italian Duce, so when Trump was asked if he was aware that the motto belonged to Mussolini and if he really wanted to be related to a fascist, he replied: “No, I want to be associated with interesting quotes” and added “Sure. It’s OK to know it’s Benito Mussolini. Look, Mussolini was Mussolini. It’s OK. It’s a very good quote. It’s a very interesting quote. And I saw it and I know who said it. But what difference does it make, whether it’s Mussolini or somebody else?”  True. I have to confess that I use it myself many times, without thinking that somebody might regard me a fascist ( being very far from those political ideals), because it was used by Mussolini. Plus, the Dux was not original.

Mussolini had found himself to rule a very young nation, which had suffered long dominations , whose positive heritage can be clearly seen in each of our regions in the variety of culture, food, music, language. But in those centuries of oppression, Italians had also gradually developed a high degree of scepticism and distrust against any form of administration. Cunning, unreliability, deceitfulness are “virtues” which are still associated to the Italian way of being, but they were also the weapons which had been developed in time to defend themselves from foreign rules. The problem is that once free and politically united, the making of a common identity was, actually, a slow process, because a chronic distrust in rulers runs in our veins and has always made us choose for the “individual” rather than the “common” way. That’s why we still tend to look for that charismatic one, who might solve all our problems, thus ending in the catastrophe everybody is familiars with. Our recent history makes no difference. 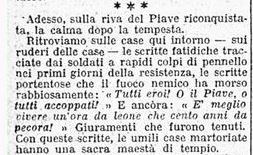 Mussolini knew that he had to fuel his people with words that had to inflame hearts, thus trying to cement his fragmented country. Strength, courage, sacrifice, a country of lions rather sheep, this was what he wanted. Even if only for one day. This motto was one of Benito Mussolini’s most popular slogan. Starting from 1926,  it became a significant part of the fascist propaganda and ended on school books, coins,  graffiti etc., but as I have said before, the Dux was not original.The truth is that the phrase was written during the First World War, on the wall of a house in Fagarè (now Fagarè della Battaglia, the municipality of San Biagio di Callalta, province of Treviso). According to the newspaper  “Il Secolo D’Italia” (but the primary source was “Il Corriere della Sera” of 19 February 1958, p. 6)  the author was Ignazio Pisciotta, mutilated in 1911, an officer in World War I.  On the ‘Corriere della Sera’ of 31 July 1918, in his war correspondence, Arnaldo Fraccaroli writes : “We find on the houses around here – on the ruins of the houses – the words of the soldiers traced by rapid brushstrokes  in the early days of the resistance(..)”All heroes! We will win the Piave, or  we will all die! “It is better to live one hour as a lion than one hundred years as a sheep!” Oaths were held. With these writings, the humble battered homes have a sacred majesty of a temple “.

Now, there is no doubt that the expression rightfully belongs to the fascist rhetoric dictionary, but to attribute the invention of the words to Mussolini only denotes the usual sloppiness that distinguishes certain journalists when reporting historical facts. And after all, would you really want to live all your life as sheep? C’mon!

I was surprised when I read about the meeting between Apple CEO Tim Cook and Pope Francis at the Vatican a few weeks ago. Even if we don’t know much about the real nature of the encounter, one thing is for sure: the Vatican must be undergoing a profound transformation, particularly for what concerns communication. Actually, everything started on 12 December, 2012 at 11.30 a.m. precisely, when @Pontifex, Pope Ratzinger in person, tweeted: “ Dear friends, I’m pleased to get in touch with you through Twitter. Thank you for your generous response. I bless all of you from my heart.”  And it was generous indeed, as a million of followers, who had eagerly waited for this tweet for days, retweeted it in few secs. The following Wednesday, twitter was used again to respond to some of the thousands questions that had been addressed the Pope through #askpontifex. Pretty amazing for a Pontiff, who had often been regarded as reactionary, especially if compared to his predecessor, John Paul II. 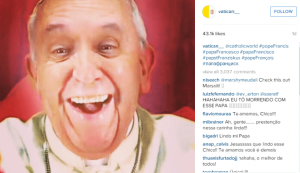 However, he had paved the way towards modernity and Pope Francis, who has certainly a natural talent for communication, followed and improved his example. He uses Google Hangouts to chat with children from around the world, and Twitter to share snippets of his preachings and comment on global news events and controversies . But Pope Francis is far from being tech-savvy. When one child asked if he liked to take pictures and put them on his computer, the Pope replied, “Can I be honest? I am really not so good at it…I don’t know how to work with a computer. It’s a bit of a shame.” Never mind, somebody helps him for sure. Going back to the meeting, I was really impressed by some words the Pope used to comment the event: “Technology cannot determine whether communication is authentic or not , but the heart of man and his ability to make good use of the means at his disposal(……)it has led to a widening of horizons for many people. This is a gift of God, and also a great responsibility”. Hence, the Internet is a gift of God, as the Pontiff had already stated during one of his Google Hangout sessions last year  .

At this point, I think we are not too blasphemous, if we say that railways were ,somehow, the nineteenth century equivalent of the Internet. The world became smaller and faster thanks to the making of those iron nets, as not only goods but also information was more easily accessible to a larger number of people. Did the Vatican “welcome” the new technological discoveries of the time with the same reformed enthusiasm of modern Popes? Were railways “gifts of God” as well? You may judge yourself from Pope Gregory XVI’s words, who “gently” defined railways as “weapons of the devil“. Gregory XVI (1831-1846) understood well the danger of those new means of communication as they not only accelerated the circulation of news, but also revolutionary ideas, that’s why he never consented them to be built in the Papal States. In the encyclical “Mirari Vos”, Gregory XVI firmly opposed to all the innovations of the time which he regarded as ” the triumph of a cynical wickedness, shameless science and unlimited laxity“. In the same encyclical he also condemned the freedom of conscience, press and thought and railways were, for sure, the means that could have spread those “viruses” in the Papal States, thus undermining the stability of his fortress.Therefore, we may say,  that almost after a couple of centuries  the Vatican seems to have finally learnt to cope with “the devil” pretty well. 😉