When the first Polynesian settlers arrived in Easter Island  with their large canoes more than a thousand years ago, they found a luxuriant, heaven like land covered with palm trees.The place was actually less hospitable than it seemed. The island was volcanic in origin, but its three volcanoes were dormant. Both temperatures and humidity were high and the only fresh water available was from the lakes inside the extinct volcanoes. Only a few species of plants and animals inhabited the land: there were no mammals, only few insects and two types of small lizards. Furthermore, as the waters that surrounded the island weren’t very fishy, the first inhabitants had to learn to live basically mainly on sweet potatoes and chickens.

The islanders heavily depended on its native plants: giant palms, toronimo trees and basswood (hau).The woods from the giant palm trees were used for shelters and in particular for big canoes which enabled the settlers to fish in richer waters and catch dolphins. The basswood was used as fuel to cook or to keep warm and its fibers were used to make ropes or fishing nets. However, the forests were slowly cleared to improve farming and grow sweet potatoes. All this brought to a rapid increase in population (more than 15.000 inhabitants), but as the island was very small, its natural resources declined rapidly.

Instead of taking measures of life sustainably, the clan leaders started to build large stone platforms, known as Ahu, which were used as burials, ancestor worships and to commemorate past clan chiefs. The majority of these constructions were built near the coast, around the island’s perimeter. One day they stated to erect huge monolithic stone statues (Moai) on these platforms, which took up immense amounts of  labour. Almost all the Moai have overly large heads three-eighths the size of the whole statue, which seemed to represent their deified ancestors. More than the carving, the greatest problem was the transport of the massive statues from the quarry to the Ahu and as they lack any draught animals, they had to rely on the effort of men who could only drag the statues across the island using tree trunks as wheels.

The enigmatic faces of the Moai rapidly spread all over the island and they were always more and more enormous, in fact the bigger was the statue the stronger was supposed to be the clan which had made it, therefore a never-ending, competition among clans started; a devastating contest which required amazing quantities of timber. By 1600 as the island was almost completely deforested, the statue erection had to be stopped leaving many of them stranded and incompleted at the quarry. But, when did they exactly stop? When it was too late.

The shortage of trees had already made people stop building houses from timber and find shelter in caves. Canoes couldn’t be built any longer, so it was now impossible to go fishing or even abandon the island. It had also become impossible to make nets for fishing. Furthemore the early deforestation had brought the island to a rapid desertification.The only source of food on the island was the chickens which became precious and primary object of theft. The lack of proteins available brought to cannibalism.The islanders were now trapped in their insane world and they  couldn’t escape the consequences of their self-inflicted, environmental collapse. 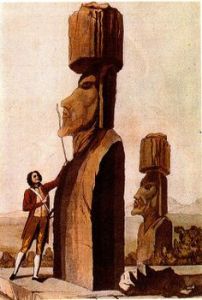 Moreover the drop of the resources resulted in a state of almost permanent warfare. One of the main aims of warfare was to destroy the Ahu of opposing clans, therefore only a few burial places remained and many of the magnificent stone statues – which had cost so much – were pulled down. Only few remained standing.When the Dutch Admiral Roggeveen visited Rapa Nui on Easter Sunday 1722, the island had now become a barren wasteland, whose 3,000 inhabitants lived in a primitive state in squalid reed huts or caves, had resorted to cannibalism in order to escape famine and were still engaged in perpetual warfare.

The question is, how can it be that they didn’t realize what they were doing to their environment? Why didn’t they stop in time? Or better, will we be able to stop in time?

77 thoughts on “The Prophecy of Rapanui”