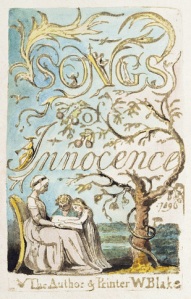 Simplicity is very often the best way to express the complexity of a state of the soul and William Blake, somehow, was a master of simplicity. Innocence and Experience are the two simple, effective words, that better portrayed for him the two opposite states of human soul. The age of Innocence is that phase when you are a child and you see the world that surrounds you with the curious eyes of wonder and imagination. In that stage the soul is highly receptive and absorbs every external input, hence life seems a joyous, frantic carousel of emotions. Unfortunately “Innocence” is a transient state and as time goes by, we drift towards Experience, that is, the age when our eyes, now opened wide, are no longer dimmed by the enchanting powers of Imagination. The more we become aware and overwhelmed by loads of responsibilities, the more we grow pessimistic and distrustful towards our future. We should try not to lose sight of that little child , that “fanciullino” , as the Italian poet Giovanni Pascoli called him, we used to be and retain a little room for him in our soul, but how? How can we fight the deteriorating effects of time over him?

Education was a possible answer or better a sentimental education. Many philosophers of the eighteenth century started to focus their attention on childhood, being that period of life when are we so responsive. John Locke warned that “the little and almost insensible impressions on our tender infancies have very important and lasting consequences “, therefore education should work on those impressions to “open and dispose their (children) minds as may best make them capable of any, when they shall apply themselves to it.”  Furthermore, he maintained that the “associations of ideas” that one makes when young are more important than those made later, because they are the very foundation of the self. 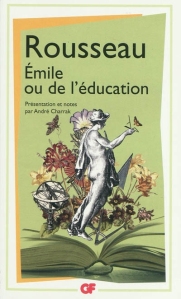 Jean Jacque Rousseau wrote in his book Emile that all children are perfectly designed organisms, ready to learn from their surroundings so as to grow into virtuous adults. The instinctive goodness of a child is spoiled by society that for the French philosopher was malign and corrupted.That’s why he also advocated an educational method which consisted in removing the child from society, for example, to a country home, thus enabling him to live more in close contact with nature, which he regarded the only source of pure, uncontaminated values and emotions. He also maintained that child should grow up without any adult interference and that the child should be guided to suffer from the experience of the natural consequences of his own acts or behaviour. When he experiences the consequences of his own acts, he advises himself. A teacher, therefore, shouldn’t but encourage the natural curiosity of a child and guide him to experience the sensorial world, only once this world has been molded  – at about the age of 12 – the tutor is allowed to work to develop his mind.The associationist philosopher David Hartley focused his attention on childhood as well and  he assumed that also  “our moral character develops in that phase as a result of the pleasure and pains caused by physical experiences“. Therefore if a child is well guided to experience the world and learn from the emotions he receives, he will be able to grow a more rounded mad with firmer ethics and more inclined to find joy and positivity in life.

That was almost three centuries ago and I have to say, all this interest in childhood was just philosophy, as the majority of children left school at six and were regularly exploited at work. Nowadays children live a more pampered life, at least in the western world, therefore there should be a more fertile ground to impart the lesson of those philosophers, but how do we educate our children? Are we really paying the due attention to make them develop their sensorial, emotional world, considering that all this should frame their moral character once they become adults?

19 thoughts on “The Sentimental Education”