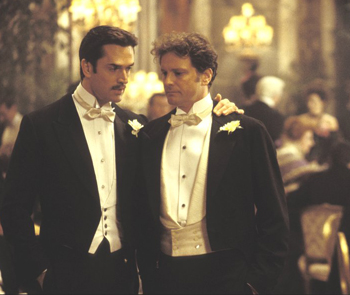 The Importance of Being Earnest, at the very beginning, seems to follow the usual morality play canvas: good vs evil. Algernon Moncrieff, one on the two main male protagonists, is the bad guy: a penniless aristocrat devoted to the pursuit of pleasure and particularly fond of muffins. This is the Victorian society and appearances have to be saved, therefore, when he wants to have a good time he pretends to go and visit an invalid friend called Bunbury, who lives in the country, whose bad health seems to require Algernon’s loving care. He is indeed a liar. His friend Earnest should evidently play the role of the good guy, in fact his name evokes seriousness, trust, assurance. Wilde reinforces this effect giving him the surname of Worthing. emphasizing that the man is also a “worth” “thing”. Actually, Earnest seems to have a good head on his shoulder,in fact everybody regards him a trustworthy, upright man. But also respectable men need to have a night out sometime, therefore he has invented a wicked younger brother, who needs to be looked after, who lives in town and whose name is… Earnest. We may believe that our good guy lacks imagination since he has given his name to his fictitious brother, but here is the trick, his real name is actually Jack at home and becomes Earnest every time he is in town. A double liar in fact. This is actually Wilde’s canvas: nothing is what it seems. He considers the old fixed categories of drama surpassed, and inadequate to mirror the complexity of the modern contemporary society. He continuously shuffles his cards throughout the play, thus depriving his audience of every certainty and when at the end every character seems to have been unmasked and every single lie crushed there is the coup de théâtre: Algernon is Jack’s younger brother and Jack’s name is actually Earnest. “it is a terrible thing for a man to find out suddenly that all his life he has been speaking nothing but the truth” he will say. Among the many adaptations of the Importance of being Earnest I particularly enjoyed that of Oliver Parker with Colin Firth playing Jack/Earnest and Rupert Everett in the role of Algernon, however, some of the  adjustments in the script were, in my opinion, quite unnecessary. Algy in the movie is Jack/Earnest’s elder brother and Jack’s real name is actually Jack rather than Earnest. These choices add nothing to the story but rather they make it trivial, thus missing the essence of the play. Anyway, the movie is worth watching.