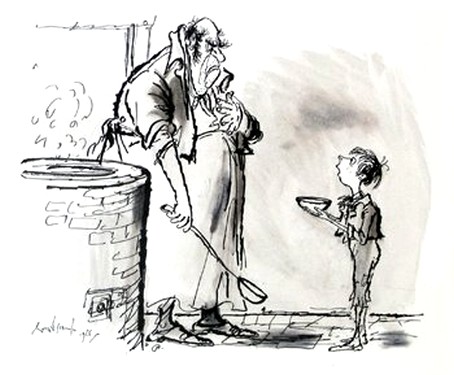 One of the keys of Dickens‘s success lies in the choice of his narrative canvas . Actually, it wasn’t anything new, because that was the typical canvas of the Morality Plays:the fight of good vs evil; but he customized that scheme adding a generous dose of sympathy and hope, thus making his fortune. The adoption of the typical dualism of the Moralities proved very effective as it was clear and particularly suitable to Dickens’s talent in characterizing all that vast humanity that peopled his novels. This duality became the distinctive mark of his works, in fact under the macro-dualism good/evil, Dickens always created many other micro-dualisms that were the frame of the narration. The famous passage when Oliver Twist walks up to the cook to ask for more is a sheer example of this technique. The macro-dualism is made up by the children/good vs adults/evil. The battlefield is the canteen where the kids used to have their gruel. The place seems very big and the copper is placed very distant from the reach of the hungry boys, as a mirage. Dickens says that this is the place where the boys “were fed“, thus stressing the psychological submission of the children with the usage of the passive voice plus a verb that implies passiveness. The cook who “ladles the gruel” is actually seen as the master, since their survival depends on him. The food is scarce, the bowls are small and the spoons seem big, the hunger is unbearable. Something has to be done. Under the threat of a big fat boy who proclaims himself ready to devour the “tender” small weak child who slept next him they decide it was high time to ask for more. Oliver will have to go to face the master. The imminent fight at dinner time is pointed out the choice of words. The apron of the cook becomes a uniform and his assistants range behind him ready for the battle. After Oliver’s request, the cook, who is a “fat,healthy man” becomes “pale” as if he were sick  and looks at him with “stupefied astonishment” but soon after he recovers himself and hits him with his ladle. Game over. Even the rhythm of the narration is dualistic with a prolonged succession of long and short sentences, The long sentences are descriptive and create the atmosphere, while the short ones either mark a sense of expectation or coincide with the speed the boys devour their food: “the bowls never wanted washing” – 5 words – “the gruel disappeared” – 3 words and record . I have just one word for his writing:amazing.

9 thoughts on “The architect of writing”